Renaissance: A Lens for Urbana15 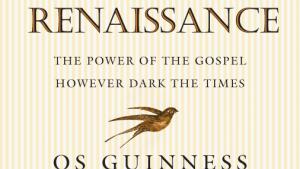 Renaissance: The Power of the Gospel However Dark the Times

Despite the importance of the topic addressed by Os Guinness, I confess resisting "the call" to read Renaissance: The Power of the Gospel However Dark the Times (Downers Grove, IL: InterVarsity Press, 2014). One person shared with me that the publication was not "academic." Another could not stop reading, re-reading (3x), and talking about the book in a manner which led me to believe that I had heard it all before. Lastly, I am not excited about advocating a return to the "Renaissance” for the Church, Christian culture/subculture, and/or "Christian" civilization. But required reading prompted me to order, read, and reflect upon Guinness’ short piece. Despite my hesitancy, Guinness quickly engaged me with the big picture:

There is no shortage of analyses of the twin crises of the church and the West, but by themselves such analyses have too often led to despondency, fear and paralysis, just as medical diagnosis without remedies can be heartless and debilitating. What we also need is a constructive overarching vision of Christian engagement in today's advanced modern world, one that is shaped by faith in God and a Christian perspective rather than by current wisdom, and one that can inspire Christians to move out with courage to confront the best and worst that we may encounter (27).

Furthermore, I appreciated that although he was not going to die on the hill of defending the use of the term “Renaissance,” his inspiration for the use of the term was its definition as “rebirth” and not a convoluted return to the Renaissance era (28-29) or an ideal version of Western Christian civilization. Yes, “Christendom” truly requires rebirth and by God’s grace we have seen this occur previously through the Christian worldview actively lived, i.e., incarnation (75, 86). “The time has come to pray and act” (48). In preparation for the Urbana Student Missions Conference (December 27-31, 2015), I sensed the urgency for the Emerging Scholars Network (ESN) to wrestle with and shape material which interacted with InterVarsity's vision:

The concept of Renaissance--with the focus upon “rebirth” and “incarnation”--engages students, faculty, and campuses. At Urbana15, I enjoyed

Honestly I could not believe how quickly some of the students embraced the call and took next steps by gathering for lunch to interact with staff such as myself. Several created an online forum (with survey) not only to debrief Urbana15, but also to explore inter-campus dialog and provide input for Urbana18. Some of the Renaissance stories, with more to come . . .

On my flight back from the Urbana Student Missions Conference, which included several interactions with missionaries, I realized that under God's direction I had engaged in conversation after conversation with opportunity to break the fear, paralysis, and polarization by which we find ourselves surrounded on campus. Furthermore, I was reminded “ideas spread best through networks, rather than through either individuals or institutions” (100). Truly a work of the Spirit of God among future leaders at cultural centers. In 2016, I look forward to participating in the Emerging Scholars Network's development of additional resources to offer a more in depth consideration of this model, in particular the tension between following Christ and engaging in Renaissance as a cultural leaders. As you have insights, please be in touch. What a joy to have you part of the growing network/team. To God be the glory!

High King of heaven, Lord of the years and sovereign over time and history, grant to us such an overpowering knowledge of who you are that our trust in you may be unshakable. Grant to us too a sufficient understanding of the signs of the times in which we live that we may know how to serve your purposes in our generation and be more truly be your people in our world today. To that end, O Lord, revive us again and draw us closer to yourself and to each other. Where there is false contentment with our present condition, sow in us a holy restlessness. Where there is discouragement, grant us fresh hearts. Where there is despair, be our hope again. For your sake empower us to be your salt and light in the world, and thus your force for the true human flourishing of your shalom. In the name of Jesus, Amen. -- From Os Guinness. Renaissance: The Power of the Gospel However Dark the Times (Downers Grove, IL: InterVarsity Press, 2014), 30.

Tom Grosh serves as the Associate Director of the Emerging Scholars Network (ESN). He brings 20 years of campus ministry experience with InterVarsity Christian Fellowship, including a decade of service in Pittsburgh (1996 - 2006), and passion for "connecting." In addition to his labors with ESN, Tom staffs the Christian Medical Society(CMS)/CMDA at the Penn State College of Medicine. Tom and his family live in Lancaster County, PA. Click here to read God's Grace in Higher Education -- an interview by Amy Hauptman for InterVarsity's website (8/3/2012).