Working Toward Deep Gladness: My Experience as an Adjunct 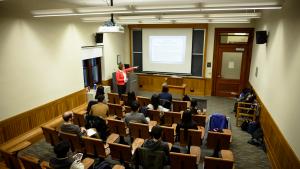 The phrase “TBA” or “staff” peppered the instructor column of the tentative course schedule the administrative assistant circulated every fall and spring. While the university seemed confident about what classes would be offered and when they would be held, the administration expressed uncertainty about who, exactly, would be teaching these proposed courses. The other adjuncts and I would joke about the heavy teaching load of this mysterious “TBA” person, while quietly wondering who was going to join our ranks. After all, these phrases were almost exclusively applied to courses that would be led by adjuncts.

Adjuncts are often discussed as though we are a monolithic group, but we enter the academy for a variety of reasons. There are of course those who, in the hopes of obtaining a tenure track position, make the academy the center of their work life and eventually become “career adjuncts.” Typically, career adjuncts are supporting themselves on their salaries from multiple part-time teaching gigs, while looking for more permanent and stable university appointments. Then there are people who bear significant family responsibilities and find themselves caring for children or aging parents for whom the flexible schedule is attractive. And, of course, there are those with established careers (and often full-time employment) outside of the academy who welcome the opportunity to share subject area expertise with students on a limited basis.

When I became an adjunct, I was in the midst of finishing my dissertation and working toward full-time employment within the university. I—like most other adjuncts in humanities departments—would be classified as a career adjunct. While I was working part-time, I was striving for a tenure-track position that, in my case, did not materialize. All adjuncts face difficulties, yet career adjuncts face a unique set of theological challenges as they must come to terms with the gap between their imagined and lived experience. Being a career adjunct forced me to wrestle with questions involving the meaning of work.

Challenges of the adjunct role:

Living in a liminal state

TBA, “to be announced,” encapsulates a lot of the struggles that I initially faced as an adjunct; for me, being an adjunct was to exist in a liminal state. I found myself waiting for my work circumstances to bring me security and stability. I Kings 7:21 states, “He [Hiram] set the pillars up in the entrance porch to The Temple; the pillar to the south he names Security (Jachin) and the pillar to the north Stability (Boaz).” Hiram’s pillars remind us that our deepest needs and most profound longings can only be met by God, but in graduate school (perhaps even earlier?) I had started believing that the academy could serve some of these god-functions. Being an adjunct was a personal exile from my own imagined promised land that painfully and fortunately showed me the limitations of my idol.

When I was in graduate school, I had no illusions that a humanities PhD would lead to a lucrative career, but I did expect to be able to support myself through my academic work. Unfortunately, career adjuncts tend to face financial insecurity and instability. I had a one-semester contract and often found myself (anxiously) waiting for course assignments to be announced. While I thankfully always had ample work and teaching opportunities, the lack of a guarantee of continued employment generated fear and continues to plague most of the adjunct population. Career adjuncts typically depend on their incomes from teaching to support themselves and their families, which makes the lack of job security particularly difficult.

Financial issues also arise as career adjuncts find themselves investing significant amounts of money and time in their professional lives. In my case, as I waited for courses to be announced, I also eagerly anticipated moving into a career trajectory that had the potential for greater job security. I continued attending conferences and publishing articles in pursuit of a tenure track position. Because I was only paid for my teaching, I could not rely on my university to financially support my scholarship. To have any chance of moving into a permanent position, I needed to fund my own research and create time to pursue my own scholarship. Yet, given my teaching load, money and time were in short supply.

The financial burden of being a career adjunct raised questions for me about the idea of calling and vocation. Frederick Buechner suggests, “The place God calls you to is the place where your deep gladness and the world’s deep hunger meet.” My Deep Gladness lies in creating with words, and I firmly believe that the world needs more people with humanities doctorates to help us understand how we as people make meaning of ourselves and our communities. Yet, the marketplace suggested otherwise. My work tended to be well received and my teaching evaluations were positive, yet the academy writ large appeared to be unwilling to make a long-term commitment to me.

Growth in the adjunct role:

Finding support from other Christian academics

As I was exploring my questions about vocation and calling, I became increasingly involved in the Boston Faculty Fellowship, a gathering of Christian academics who discuss their work through the lens of faith. Talking with these mature believers who had reached more advanced points in their careers helped me imagine what serving God in the academy could look like if I managed to stop viewing my work as chiefly concerned with my own reputation or status. Rather than asking how other people might evaluate my research and teaching, I started asking how God wanted me to use the gifts and resources he had given me to serve and glorify him.

Given my role as an adjunct, I realized that I was strategically positioned to advocate for others who were being financially exploited, and I committed myself to participating in the formation of a union for adjuncts on my campus. Micah 6:8 became my theme as I joined my colleagues in seeking “to do justice” on and for our campus. I had the great privilege of being involved in our bargaining unit’s first contract negotiations. Our work led to an agreement that secured higher pay and university support for adjunct research. Seeing the immediate impact that words could have on the living conditions of adjuncts, I learned that it was possible to share my Deep Gladness with the world, while simultaneously addressing the needs of others.

Looking outside the academy

As I was thinking about vocation and calling, I had the opportunity to go on a short-term mission trip to South Africa to support a local educational initiative. On that trip, through a series of incidents, God showed me that he had given me talents and gifts that I was responsible for using and protecting. To be honest, it has taken me a while to get to the point where I can write the previous sentence because such a sentiment has always seemed to me to reek of pride. However, studying Philippians with my mission team helped me better understand that true humility is rooted in selflessness—in thinking of Christ and others more than myself. Philippians 2:3-4 exhorts, “Do nothing from selfish ambition or conceit, but in humility count others more significant than yourselves. Let each of you look not only to his own interests, but also to the interests of others.” Although my trip confirmed to me that God expected me to use my abilities in service of him and others, I was still left with questions about the nature of that work.

Beyond the adjunct role:

After seeking the counsel of many wise people and after much prayer, I’ve realized that God is moving me out of the academy.

Since I’ve started sharing that God is moving me in a new career direction, some people have asked me if I feel that my years in the academy were wasted. They were not. God used that time to deconstruct some of my idols and teach me to seek his glory rather than my own. I’m learning to stay focused on him regardless of my circumstances, and to allow him to use me wherever he places me. God showed me new ways of relating to work, and I’m thankful for that. I’m also grateful that God gave me the opportunity to develop new skills and to work with so many thoughtful people. Seeing so many academics express Deep Gladness through their work gives me hope that God is reforming and recreating our educational institutions to more clearly reflect his image.

Summar Sparks (PhD, UNC Greensboro) has worked as an adjunct lecturer in the English and Media Studies Department at Bentley University for four years. Her dissertation, "Bound by Paper: Nineteenth-Century Southern Editors and Their Northern Connections,” focused on antebellum print culture and social networks, and involved the close study of editors' careers. In addition to her adjunct work, Summar served as the assistant editor of College English and as an editorial assistant for Legacy. This fall, she will begin law school at Boston University.