Thirsting for Shalom in a City on Edge 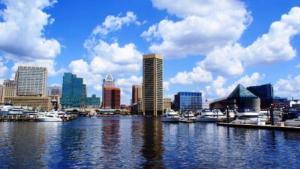 I serve as the Area Director for Graduate and Faculty Ministries in the Mid-Atlantic Area.  While my main work is leading the area, I also spend a fraction of my time resourcing and encouraging the Johns Hopkins University Graduate Christian Fellowship. --Dwight Schwartz

An Opportunity to Consider Ferguson

The JHU GCF recently invited a member of the Baltimore area community to eat lunch with students on campus and to share a perspective on the recent widely reported news from Ferguson, Missouri.  That lunch was scheduled, a few weeks in advance, for May 1, 2015.  Then on the weekend of April 25, Baltimore began to experience protests due in part to the injuries sustained by Freddie Gray while engaged with members of the Baltimore City police force.  Those protests gave way to full-scale riots that peaked and ended on Monday, April 27, the day of Freddie Gray’s funeral in Baltimore.  All of a sudden, our pre-planned lunch event on May 1 had taken on a more immediate sense of relevance for us here in Baltimore.

I had the opportunity to meet Mr. Joseph McCray in March, when Maria and I enjoyed the privilege of serving as godparents at the dedications of two small children at Mr. McCray’s church.  Mr. McCray is an African-American with a 28-year career in law enforcement.  In meeting and getting to know “Joe” – as he signs his email messages to me – and considering the pain we all feel over events like the Ferguson event, it became clear to me that Mr. McCray had something to share with me and with the university community.  Here was a man who embodies two demographics that — some news outlets would seem to suggest — are consistently at odds with one another.  Additionally, here was a man who is a deacon in a very large church congregation in Baltimore whose membership consists almost entirely of people of African descent.  Among Mr. McCray’s duties as a leader in his church congregation are teaching and mentoring younger church members in a discipleship program.  If anyone could speak with authority, compassion, and grace, about Ferguson, and now Baltimore, I believed that Joe would be the person to do so.

A City on Edge

So, in the very week in which the pain, fear, and uncertainty surrounding Baltimore’s riots was very fresh and raw for all of us, and as the public’s understanding of Freddie Gray’s treatment in the custody of Baltimore City police officers was still evolving, we were privileged to hear someone with considerable experience in law enforcement conveying something of the complexities that attend these kinds of cases, and to do so within an explicitly Christian framework.

Mr. McCray’s talk began with some personal introduction and reflections on his upbringing and his faith journey.  His remarks included the stories of a rural upbringing that included a lot of hard work, of his membership in a branch of the US military, of his early years in law enforcement on the Baltimore City police force, and of his eventual commitment to Jesus Christ somewhere in the middle of his adult life.  The rest of Mr. McCray’s talk included a wide-ranging set of reflections on his experiences as a member of various law enforcement agencies, and his professional “connecting the dots” for us as observers of the Ferguson and Baltimore situations.

As Mr. McCray spoke to us, a number of things came together, the collection of which ministered to some of our turmoil surrounding the Baltimore and Ferguson situations. In our speaker, Joseph McCray, everyone was able to meet:

I believe that the experience of most people in attendance at Mr. McCray’s talk was broadened by meeting one person who embodied so many of the questions that we are now discussing regarding the widely reported events that occurred in Ferguson, in Baltimore, and in a number of other locations across the United States.

Perhaps, even after such a talk, we have yet to see pervasive eruptions of lion-laying-down-with-the-lamb kinds of shalom on our campus, or in Baltimore.  But I contend that campus and other communities must begin to live into the kind of reflection that we have promoted in this campus lunchtime event: real humans — us – on campus, and people of good will, like Joe McCray, in his career in the wider community — with all of who we are, embracing and engaging hard Shalom-inhibiting problems and seeking the whole truth in these difficult situations, as a way forward together toward Shalom.  I believe that we made some progress toward this goal if the feedback that we received from those in attendance at the event is any indication.

For his presentation, Mr. McCray’s capstone was this:  Having encouraged his listeners to be patient in puzzling/difficult engagements with law enforcement, he reminded the audience of Romans 8:28, of how God is still in charge, and still at work, for the ultimate good of those who love Him.

The providential sense that I began to experience, from the first day of learning to know Mr. Joseph McCray and his history, still serves as a witness of hope to me as one Shalom-thirster in a city that is – knowingly and unknowingly – thirsting for Shalom. I feel – and these feelings have not waned – as if I have found a friend, Joe, whom I will have for a very long time, and a fellow Shalom-thirster who will continue, nobly, to protect and foster Shalom in his various fields of  service.

In closing, I invite you to pray for the Johns Hopkins University Graduate Christian Fellowship, and the many other Christian student groups on our campus and in the Baltimore area.  The everyday life of these fellowships involves engaging with members of the wider Baltimore community, and engaging (sometimes knowingly, and sometimes, unknowingly) in the complex web of cross-cultural interpersonal dynamics that makes the city of Baltimore what it is: a typical larger American city, one that hosts large business, cultural, and educational institutions while living with and through the standard challenges and benefits that commonly arise in our larger urban centers.  I invite you, also, to pray for Joseph McCray.  With one of our events under his belt, he has already been engaged by a leader of the JHU medical student Christian fellowship, and has also been considering the possibility of taking his message to other campuses in the Baltimore area.

Dwight Schwartz joined the paid staff of InterVarsity Christian Fellowship in 2003 after completing doctoral studies in Chemical Physics (University of Illinois at Urbana-Champaign, 1997), and post-doctoral research, teaching, and IT support at Montana State University - Bozeman.  As GFM’s Area Director for the Mid-Atlantic Area, he enjoys engaging graduate students, faculty members, and ministry colleagues from across the spectra of academic and ministry disciplines in matters of importance to academic life and the Christian faith and to the growth of witnessing communities on campus. He maintains an active interest in science, computers, and other information technologies.  He is married to Maria, who is a volunteer with GFM, an undergraduate academic advisor at Loyola University Maryland, and an accomplished cellist.  Dwight and Maria have lived in Baltimore, Maryland, since 2003.