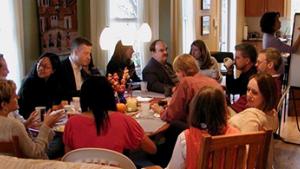 When InterVarsity established a Graduate Faculty Ministry division for Boston, our team engaged in a strategic planning process to discern the potential for graduate student, international, and faculty ministry. As the one leading the whole process, I had the least amount of faith for an active faculty ministry. My experience with faculty over the years had not been promising. I was both afraid of them and judgmental of them. So when faculty ministry was suggested, I grudgingly put it into the plan. And all we did to implement that element was to begin praying that God would do something. It felt impossible.

The stirrings of a faculty fellowship

Yet that fall I randomly started bumping into faculty. God brought some I had known from college and graduate school. Former students from our grad groups came back to Boston as faculty. At church, I sat down next to a woman I didn’t know and asked, "Are you here for school or for work?" "Both," she said, because she was a new faculty at Harvard. We had coffee together and I learned she's super missional and an intercessor to boot.

I said to Jeff Barneson, the team leader at Harvard, "Have you noticed that all these missional faculty are showing up here in Boston?"

"We should gather them and feed them."

If you build it, we will come.

Jeff wrote an email to all the faculty he knew, I added all the faculty I knew, and in December we gathered everyone at Jeff’s house. He made chili relleno casserole. I bought vanilla bean cake—our standby dessert at every meeting since. About twelve people from all different campuses showed up. I took them through a whiteboard exercise.

We asked, "What have you seen God do on campus?"  They shared and I wrote their answers on the board.

Then we asked, "What would you like to see God do on campus?"

The conversation that came out of these two questions brought so much enthusiasm that when the meeting was over, a professor walked up, held my arm and said, "I will host anything you ever want to do with faculty."

With that offer the Boston Faculty Fellowship (or BFF—the funniest acronym ever) was born. Because all we needed was a group of faculty excited about being together, and a professor who was willing to host.

The faculty basically said, "If you build it, we will come." So, unlike any other ministry I've ever done with InterVarsity, I became the person who built this. I did everything that I would never, ever do for students. I sent all the emails. I wrote the agendas. I organized the leaders and led our leadership meetings. I catered the food--meaning I cooked it. I bought the vanilla bean cake. I made postcards and mailed them. I directed our January retreat.

The importance of trust and a winsome culture

At our first meeting after that initial gathering, we invited a junior law professor with a remarkable story. He had left being a partner at a major law firm to plant a church. His story was really a story of failing as a church planter. As he processed his failure with God, he realized what he had liked best was teaching and working with the youth group. This led him to pursue teaching law.

The next time we met, a sociologist who's been tenured at three top ranking universities, told two stories of failure: her divorce her first year of grad school, and being targeted by the most famous colleague in her department as racist.

Everybody who came to these meetings was completely blown away. They said they'd never heard such authenticity and vulnerability in any faculty context. In these stories of failure and brokenness, God’s goodness and the hope of the gospel leaked through. These stories set the culture of our group, a very winsome culture—so different than what I had experienced with faculty in my years before.

Other strange things happened along the way. The intercessor faculty woman I met at church wanted to bring a prophet to prophesy over the faculty fellowship. Because others in the fellowship were charismatic and open to the prophetic, they said, "Great!" It took me an hour and a half to figure out how to write the email announcing that a prophet was coming.

The prophet came for our third meeting and prophesied over about a dozen of us. This guy was a genuine prophet--it felt like he was reading our souls. Many were in tears because of what he said, so touched by his words of encouragement. We had hosted these stories of vulnerability, and then the prophet. Community was built, and the trust level grew.

The value of yearly retreats

The next year, soon after the first meeting, two different professors emailed me, "What do you think about having a retreat?" Surely that came from God! I connected them and they raised it at our next meeting. We learned early on that faculty are hungry to hear from each other. If Jeff or I taught anything other than the Bible, it just fell flat. If I had said, "Let's have a retreat," they would all have looked at their feet like they did for the two straight years I asked for some of them to step forward as leaders. But when two of them independently said, "Let's have a retreat," everyone jumped onboard. That's how the January weekend retreats began.

These retreats have been incredibly important because there is great power in getting faculty together beyond just a few hours. The most well-attended retreats have been the one with Santa Ono when he was Provost at Emory (before becoming president at University of Cincinnati and now University of British Columbia) and another with Mary Poplin. Hearing from someone with Santa’s scope helped recruit faculty, and Mary’s testimony about coming out of secular humanism into faith was so compelling, folks came to hear more.

It was at the first retreat talking about vision for the group, that the intercessor/prophet-inviting faculty called out, “Nothing less than the intellectual transformation of the world!” That looks a little too arrogant on a website or postcard, so it became the “secret vision” with “Serving as Christ’s ambassadors on campus” as the official motto. The other spoken but not written motto is “Always welcome, never guilty.” There was not to be a whiff of guilt around attendance.

The most challenging part of the first two years was building a leadership team. Every time I raised the idea, I experienced some of my worst ministry moments. Complete, dead silence. I kept raising InterVarsity’s commitment to indigenous leadership to no avail. At the second retreat (the one where we found out we had bedbugs), the faculty wanted to pray for me. I said my biggest prayer request was for leaders—and several stepped up after that. God is good!  There has been a leadership team ever since. The leadership team meets about five times a year, setting vision, coming up with meeting topics, and planning the retreat. The leaders rotate often—some people come on for just a semester or a year. Getting leaders will continue to be a struggle because faculty are so busy, but it's been key to have them.

Defining the group—who is a faculty member?

Another early challenge was the question of where boundaries would lie. Was this a fellowship for only faculty with or on tenure track? Where did adjuncts, lecturers, researchers, administrators, and post-docs fit in?  I brought the question to the newly-formed leadership team and I’m so proud of how they responded. Rather than mimic the hierarchy and values of the academy, they wanted everyone who called themselves faculty to feel welcome.

When the Black Lives Matter movement began, God put on my heart the need for Black faculty to gather—especially since I have about thirty on my email list and they don’t all know each other. Every Black faculty I talked or emailed with said they were very interested. But with busyness it took eighteen months for me to find a faculty member willing to host and lead the conversation. We finally met, I’m pretty sure they will continue to meet.

As designed, the Boston Faculty Fellowship has minimal programming. The plan has been to meet twice a semester on Sunday afternoons and have the January retreat consist of one overnight over the MLK holiday weekend. There have been occasional spring service projects or a pool party in May. Postcards for save-the-dates and then an email two weeks in advance of the actual meetings are critical. Ministry staff need to do almost all the grunt work, taking seriously the faculty request to build it so they can come.

What would happen if more faculty were reached?

It’s been sobering to realize that there are sixty campuses in Boston alone and probably thirty-five to forty thousand faculty. What would happen to academia if a small group of faculty prayed on all sixty campuses for God’s kingdom to come? The only way that could happen is for all the campus ministries to work together to reach faculty. I’m praying for God to bring someone to Boston who can work with faculty full time. And I have hope. After all, it was just a little bit of prayer (with faith smaller than a mustard seed) that launched the Boston Faculty Fellowship.

Kathy has served with InterVarsity since 1990, currently as National Faculty Ministry Director. Her other roles have included Associate Director for GFM, AD Boston GFM, CSM at Harvard, Columbia, NYU, and NYCUP founder and director. Kathy has a PhD from Northwestern University in Human Development & Social Policy. She is married to Scott MacLean and they have three children (2 in college!) and an over-anxious mini labradoodle.