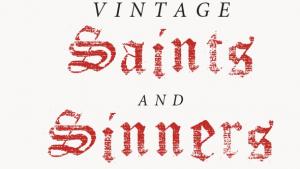 From “Take a Long Walk: Søren Kierkegaard (1813–1855),” an excerpt from Vintage Saints and Sinners: 25 Christians Who Transformed My Faith (InterVarsity Press, 2017) by Karen Wright Marsh

The best help in all action is to pray —

that is true genius; then one never goes wrong.

At our house, the New Year arrives in August. Fresh beginnings and great expectations: a new semester at the University of Virginia. I glance at my Google calendar, mapped out in busy blocks of color. Goodbye, lazy summer.

Three hours from now, sixty undergrads will walk through the Bonhoeffer House door, hungry for the lunch that’s become a Friday tradition here. Guess who’s cooking? Before I start the lasagna, I rehearse Søren Kierkegaard’s prayer, “Teach me, O God, not to make a martyr of myself through stifling reflection. Teach me to breathe deeply in faith.” And I take one full breath. In and out.

Usually, the day’s momentum is enough to keep me buzzing through the day. Lately, though, I’ve felt a tug in my chest, a twist of uneasiness below the surface of things. I’ve been drawn back to my battered copy of The Prayers of Kierkegaard. I’m slow to admit what so many already know well: time in prayer, time with God, is my only hope for peace.

Søren Kierkegaard did not make his name on the merits of a dynamic public prayer life. In his own time, the existentialist philosopher rambled for hours through the charming streets and hidden passages of Copenhagen. Everyone in town recognized Søren, the spindly, comical figure whose tousled hair stuck up nearly six inches from his forehead.

Søren’s brilliant, caustic wit was admired all over. You wouldn’t have guessed that behind the roving, familiar figure with top hat and walking cane there was a melancholy guy trying to know and solve the deep riddle of life. He’d always held a whole lot inside, an intense boy in the power of a “monstrously brooding temperament.” It was no picnic to be the youngest of Michael Kierkegaard’s seven children. Søren’s haunted, pietistic father was convinced that they were cursed, each doomed to die tragically by thirty-three, Jesus’ age at his crucifixion. Old man Kierkegaard took his kids on treks to the cemetery where he exhorted them to dwell on the agonies of Christ and meditate on their own horrific sins. No wonder little Søren was filled with dread.

As he grew older, teenaged Søren was both repelled by and attracted to his father’s fierce religion. He wrestled with faith as a theology student at the University of Copenhagen. As Søren began thinking for himself, the weighty old orthodox Christian dogma cracked and shifted. What options were left to him then? Punishing, wrathful Avenger or respectable, distant Deity—could either God be true? And what did any divine being have to do with him and his small life? Søren looked to philosophy as a way to slip the snares of religion.

I’ve always liked philosophy. Ancient Greeks pondering the nature of reality. German idealists and French postmodernists. Logic, with its axioms and arguments. Thought experiments to sharpen my mind.  Søren took philosophizing far more to heart; his was a high-stakes search for purpose. In the pages of his journal, Søren wrote, “What I really lack is to be clear in my mind what I am to do, not what I am to know.” He was after an intellectual understanding that would enliven his existence in the world—one grand passion to comprehend his essential self, to know truth that was true for him, to find the idea for which he could live and die.

Søren’s melancholy deepened as philosophy failed to bear the weight of his all-encompassing quest for meaning.  As for theology, Søren couldn’t shake his suspicion that beyond abstract religious dogma there actually was a divine reality: the person of Jesus who would demand a startling commitment. But at the unwelcome prospect of a full spiritual conversion that would surely offend his reason and clash with his emotions, Søren determined to try everything else before he became “seriously a Christian.”

One Sunday, Søren read the Gospel story of the disciples who, frightened at their teacher’s crucifixion, barricaded themselves in an upper room refuge. Søren felt much like them, conflicted and scared, at once relentlessly seeking the divine, studying theology and even reading Scripture, and yet hiding out from the living God. The disciples were taken by surprise when Jesus showed up saying, “Peace be with you.” If Jesus was going to get to him too, Søren realized, it would only be through firmly locked doors. And yet that is just what the resurrected Jesus did. On May 19, 1838, Søren had a spiritual experience, a feeling of “indescribable joy” that was inexplicable to his rational mind. He arrived at his life’s central truth at last—the realization that, at his core, he was a person found by God.

The young man who had examined belief from an intellectual distance, standing outside it, now threw himself into an inward, ardent Christianity. (Søren Kierkegaard is not called the father of existentialism for nothing.) Søren well knew that his individual relationship with God was a radical choice. As he put it, faith is an either-or. It is either God or—well, the rest does not matter. Søren embraced faith as a passion, a leap to live life in its fullest sense.

The newly committed Søren wanted to bear witness to Jesus Christ but not, he said, in the way of the “parsons’ trash” peddled by his own state church, the self-satisfied institution that counted all Danish citizens as automatic Christians from birth. Thoughtless piety made him want to scream.

And so, out to provoke the bored religious folks around him, Søren became a kind of literary prankster. He wrote aesthetic, philosophical, and polemical volumes, journal essays and popular newspaper articles. Among the pages of his collected works, Søren surprises with a jab. Don’t just be a Christian, he says, as if “Christian” is some assigned label that you’re simply stuck with forever, an identity that means nothing to you. No, take all of your life to become a Christian.  Abandon your calculated safety for a reckless, wholehearted life of faith in Christ. Continue to become. Grow. Risk. Take that radical leap of faith, right now.

Sometimes I presume my faith, as if I were a smug Danish Christian, detached and drifting in and out of convinced belief in God. My spirit floats somewhere beyond the embodied decisions I make in everyday life. The vital energy that wakes me up in the morning is spent on temporary tasks and immediate concerns, heedless of the demanding Jesus who waits at the locked door of my heart.

It is anguished, struggling Søren who shows me the path into unreserved living—mind, body, and soul, fully aware. I find that once Søren experienced the faith that reached beyond abstract knowledge, it was the practice of prayer that kindled his inner transformation. “The function of prayer is not to influence God,” he said, “but rather to change the nature of the one who prays.” Growing into a fervent person of prayer with living faith as his aim, Søren’s daily encounters with the eternal became as essential to him as breathing.

It’s no surprise that we don’t all know the devotional side of Søren; he was reserved about his own private devotional life. Even as he was perfectly comfortable ranting against the Danish church or dashing off clever magazine editorials, he confessed that baring the intimacies of his life with God was “so difficult, so difficult.”

I wonder if Søren felt like I sometimes do—that while my public Christian self can lead Bible studies and discuss theology, I am oddly hesitant to speak about my raw, honest connection with God---unlike the many forthright people who open their faithful hearts to anyone who will listen. I resonate with Søren as he reflects on his personal spiritual life: “My inwardness is too true for me to be able to talk about it.”

Prayer, Søren’s ongoing conversation with God, becomes the source of his greatest earthly happiness. In his journal, Søren speaks frankly to God of his questions, confidence, doubts, joys, pains, consolation, suffering, love, longing, depression. It’s all there. And finally he arrives at gratitude, saying “It is wonderful how God’s love overwhelms me,” a prayer of thanks to God for doing so indescribably much more than he’d ever expected.

No longer a caricature of the brooding, angst-ridden intellectual, Søren prompts me to take down the coffee-stained volume of one hundred prayers and approach God in his company. Father in Heaven! we begin. Help us never forget that You are love. This conviction will triumph in our hearts, even if the coming day brings inquietude, anxiety, fright or distress. Soul brother Søren, so traumatized by his father’s fearful fundamentalist religion, was once found by a great divine love. Now he urges me to take the risk and go deeper, to fling myself into God’s presence—and know the one good, unshakeable thing in life.

An excerpt from The Prayers of Kierkegaard, Perry D. LeFevre (Editor)

Father in Heaven!  You have loved us first.  Help us never to forget that You are love so that this sure conviction might triumph in our hearts over the seduction of the world, over the inquietude of the soul, over the anxiety for the future, over the fright of the past, over the distress of the moment.  But grant also that this conviction might discipline our soul so that our heart might remain faithful and sincere in the love which we bear to all those whom You have commanded us to love as we love ourselves.

For more information on Kierkegaard and the other vintage saints and sinners featured in Karen Wright Marsh’s book, see Vintage Sessions, a library of 25 free printable pdfs for small group or individual study available on the author’s website.  Each session features a handout of a primary text reading along with a leader's guide of questions for discussion. 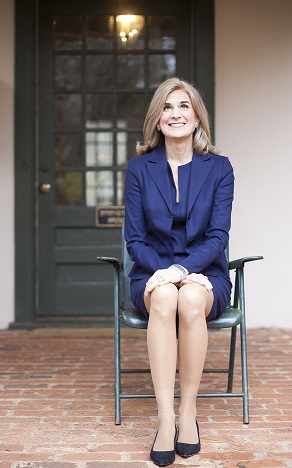 Writer and speaker Karen Wright Marsh is the executive director and cofounder of Theological Horizons, a Charlottesville-based ministry that advances theological scholarship at the intersection of faith, thought and life. Karen lives at the Bonhoeffer House with Charles Marsh, the Commonwealth Professor of Religious Studies and director of  The Project on Lived Theology at the University of Virginia.