Lunchtime at the Areopagus: Developing Community around Discussions of Faith 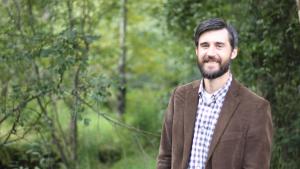 Joel Potter longed to have his philosophy students experience a good intellectual defense of the Christian faith. Christian speakers were occasionally brought to the University of Alaska Anchorage campus, but the events he attended lacked opportunity for debate and deep discussion. “I was thinking about it from the standpoint of the philosophy majors I had in classes who weren't Christians. They were going to these events and coming away dissatisfied. There wasn't a meeting of the minds.”

Having grown up in Papua New Guinea, Potter knew the importance of learning opportunities outside the classroom. As an undergraduate beginning residential life on a college campus in the US, activities such as reading groups, guest lectures, and conferences—along with mentoring by faculty—helped him form friendships, cope with culture shock, and adjust to life in the States. And they reinvigorated his love for learning.

What could he offer to the students at UAA to help them participate in meaningful discussions and relationships outside the classroom? What if there was something ongoing, he wondered, that would foster thinking and discussion about the Christian faith? Talking with community members, clergy, and faculty, the idea of a series took shape. To help with planning, he put together a committee of students and included those with a diverse set of views—Roman Catholic, Orthodox, Evangelical, along with those who were atheists and agnostics.

Out of this emerged Lunchtime at the Areopagus, a weekly lecture series open to students, faculty, and the public.  Each week a different speaker came and presented on some matter of faith, many related to the Christian faith. Potter says, “My goal is for these lunches to be a place where people of different backgrounds can find the talks and the discussion meaningful.” Scheduled at lunchtime, as much as possible between classes, students were able to grab lunch, attend the sessions—thirty minutes of presentation followed by thirty minutes of discussion—and still get to class.

Considering who to invite as speakers, Potter has tapped people of interest locally and via videoconferencing. “I really would like it to be a developing community of both speakers and the audience,” he says, “One of the things I've wanted to do is to tap into the resource of local clergy.  I think people have lost sight of the idea that clergy are a resource for a certain kind of knowledge.”

Although he has had big name speakers, including the First Lady of Alaska speaking on faith and politics, the logistics necessary tend to make their participation prohibitive. “I want people to see that there are resources here,” he says, “and that we can have these meaningful discussions together, without spending a lot of money or making it a big deal.”

To find local speakers, Potter started with relationships he already had with local clergy and students. “I've tried to be easy on myself,” he says, “by letting it grow organically, letting this web of relationships continue to spread. Someone will say, ‘Oh, you should invite this person,’ so I get in contact with them.”

Speakers have included a local rabbi with a PhD in Ancient Near Eastern Studies presenting on creation and on the Garden of Eden, Providence Hospital’s Director of Ethics presenting on miracles at the bedside, a local nonprofit director speaking on compassion and a theology of service, a philosophy professor discussing the nature of faith, and a hospital chaplain speaking on serving as a chaplain in a pluralistic environment.

Not all speak from a Christian perspective. “It’s really hard to design something that meets students that are searching, or who aren't committed to Christianity, to explore those sorts of questions. And that's what I really desire,” Potter says. To meet this need, he has invited a variety of speakers including one whose talk is entitled “Why God Does Not Exist, and Everything Is Permitted.” Potter laughed, saying, “So it was a defense of atheism and moral nihilism. And when I thought about that, I thought, well, I wouldn't want students to attend that talk and be persuaded that atheism is true, but I think I need to have faith that the truth will come out.”

He does ask that speakers be clear about their assumptions. “Simply to acknowledge the fact that ‘I’m working within this faith tradition’ makes it so much easier for people to listen and to not feel like, ‘Oh, I'm the outsider in this group, because I don't share that assumption.’” Potter referred to philosopher of religion, Alvin Plantinga, who describes this idea in regard to doing Christian scholarship in a secular context. “As long as you're explicit about your assumptions,” Potter says, “you can say ‘If these things are true,’ and then argue that something follows. This allows for a kind of pluralism. As long as people from different backgrounds acknowledge their assumptions, they can have a dialogue, and be open to those assumptions being questioned.”

Lunchtime at the Areopagus has been successful in bringing together speakers, students, and members of the Anchorage community. Averaging 20-25 attendees weekly, with several regular attendees, Potter is pleased with the community that developed, “I really like bringing people together that are separate from one another, that have very different ways of looking at the world, and helping them to actually see what they have in common. “With the polarization that's going on in the nation, being a part of something like Lunchtime at the Areopagus is very encouraging to me. I love to see Christians speaking with those of different faiths or those who aren't believers of any kind about substantive things in a meaningful way. It’s a way of counteracting the polarization.”

This year, Potter has the opportunity to live out more fully his conviction that the university should serve as a community of learners. In addition to his normal teaching responsibilities, he will serve as UAA’s first Faculty-in-Residence. Although living on campus with a family of five will have its challenges, Potter sees this as a great opportunity to live what he saw modeled. “I am who I am today,” he says, “because of professors who opened their homes to me and were willing to mentor me. I think about what some of my professors would do if they were in my position on almost a daily basis.”

As Faculty-in-Residence, Potter will be designing academic programming for residential students, seeking to achieve some of the same goals he has had for Lunchtime at the Areopagus: fostering a community of learners by bringing together people of diverse perspectives and viewpoints around an examination of important life questions, helping students to lead more integrated, meaningful lives.

Marcia Bosscher is an associate with Faculty Ministry and the founding editor of The Well. Her interest in faculty ministry is shaped by years with a faculty husband and by the community of her campus church.