Dreams for the Academy 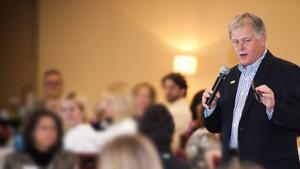 Sanford (Sandy) Shugart, PhD, spoke to InterVarsity’s Graduate and Faculty Ministry Staff in Orlando, Florida, in January 2017, about his dreams for the influence of faculty on college campuses.  His remarks have been edited slightly for a faculty audience.

Greetings and welcome to Orlando, where I have had the privilege of leading Valencia College for some 17 years.

Today, I’d like to share some thoughts--dreams, in fact--as a college president who is a Christ follower in a large secular institution. These are dreams that touch current and future faculty and their influence on students. The model of direct ministry to students in a traditional residential university, though vital, is limited by the fact that only about 15% of all undergraduates in America attend college that way. Faculty therefore may be the most important, if not the only, influence of consequence on campus. And believing faculty, who demonstrate a robust faith and a robust intellect, can be “a city on a hill” for students who need to know that Christ came to take away their sins, not their minds.

Faithful faculty can, and must, have a powerfully redemptive influence on colleges and universities, and it is in this work that I want to set out my dreams.

May I begin with a poem about dreams I wrote several Advent seasons ago, called Joseph?

Four times the common laborer laid down to rest,
to seek the ordinary solace of night only to be
astonished in sleep by the arrival of power,
an advent, the dream voice beyond all voices
speaking into his life with easy authority.

Forget convention and marry the overshadowed girl.
Forget plans and flee to a place
As alien and angular as its monuments.
Forget your fears and journey again through the desert
To the occupied country of your father.
Forget home and settle instead in the land of prophecy.

Words of thunder quaking the solid ground on which he lived.
Who knows so clearly what he truly dreams?
Who trusts so deeply the strange revelations of
his own interior landscape?
Who acts so boldly on what he knows in himself
against the evidence of everything he sees?
Who believes so humbly that he is chosen, too,
for a role that makes miracles possible?

This one did.
Four times.

Here is a well-known story, but a character who has been eclipsed by others.  We know so little about him, yet Joseph played a decisive role again and again.  There are many things to learn from Joseph’s example, one of which is to trust our dreams, the dreams God gives us, and in doing so to release the redemptive power of God in simple obedience.

So here are four dreams I cherish as a leader in higher education, dreams of redemptive power in the academy, dreams that may not be as far-fetched as we are tempted to believe, in light of Joseph.

Steward the students God has given in our care

First, I dream that students would become once again the center of the mission of our colleges and universities—their formation, their learning, their promise, not just the institution’s.  I’m afraid at far too many universities and colleges, even many that give lip service to being “student-centered,” there are many priorities competing with the core mission of the institution.  Research and public service, especially in “Research 1” universities, can so consume the attention of the faculty and so leverage the reward systems within the organization that students tend to get lost.  Even more commonly, the underlying business models of many institutions have led them to treat students as so many “full-time equivalents,” subject to massively impersonal approaches to teaching and a commercial culture of recruitment and enrollment management.  Perhaps most diabolical, though, is an institutional culture arising from two generations of relentless capacity building—build the enrollment, build the buildings, build the endowment, build the athletic program, build the reputation, build the brand—that has become almost hopelessly self-absorbed.  It’s as though we all—the public, the students, the alumni, and others—are here to serve the institutions, and not the other way around.

The outcome of all this is a profound tendency to alienate and depersonalize those who were originally the center of the mission.  Is it too far-fetched to dream that caring faculty, no matter what else they may be engaged in at the institution, may put students back at the center of their work, seek to engage meaningful relationships with them, mentor and nurture them, challenge them with a loving rigor that raises expectations and invests in their futures?

For believing faculty, I would ask, “How do you practice your stewardship of the students God has given into your care?”

In my second dream, a genuine collegiality would flourish in the academic department.  This is the place where faculty really live.  It can be deeply nourishing or a special kind of hell.  The stories of broken departments, rife with infighting, factions, backbiting, and even lifelong feuds, are legion, captured in the famous remark of former University of California President Clark Kerr: “Academic politics are so vicious because the stakes are so low.” More commonly, especially in an age of digital communication, the department is just a bureaucratic structure, a place for conducting the quotidian banalities of administration, involving little or no real engagement among the faculty who inhabit it.  Yet, from the earliest history of higher education, universities were conceived as communities of scholars, born out of the monastic model of association, humble study, and devotion to the common life and faith of the community.

Is it crazy to dream that academic departments could become places of deep connection, where faculty traded and honed ideas, learning from one another and relishing the challenges of teaching, inquiry, and argumentation? That young faculty would find them a haven and resource for their growth and development?  That department gatherings could include real celebration of the privileged work of academic life and the virtues meant to be cultivated through serious study?

Okay, I’ve gone too far.  But to believing faculty I would put the question, “How do you practice your stewardship of your academic department where God has placed you - your colleagues and their community?”

Restore a search for truth, a coherent view of reality, in academe

In my third dream, the great intellectual project of the ages—the search for truth, the desire to shape a coherent view of reality, a theory of knowledge, a grounded aesthetic, a transdisciplinary discourse and perspective, an interest in the big questions – would find a place once again in academe.  It’s not just that the hyper-specialization of the disciplines has inhibited the broader conversation, or that the failed project of postmodernism temporarily brought the questions of truth and meaning into disrepute.  It’s that the whole enterprise is so focused on short-term ends that the deeper purposes are squeezed out.  Students, parents, and policy-makers want pathways to careers and a return on investment.  Faculty are necessarily obsessive with the time required to publish work in remarkably specialized fields of study, especially when they are young and on the hunt for tenure.  And the reductionist materialism that underlies the practice of much scientific inquiry has been reified throughout academe, putting those who may raise the big questions, or even publish relevant works for the general reader at risk of ridicule from colleagues.  Yet there are shining exceptions, teachers often surrounded by enthusiastic classes of undergraduates whose intellectual fires have been kindled by a scholar who is not embarrassed to wrestle with mysteries that are unlikely to appear in a refereed journal, professors whose technical scholarship is so refined and respected that they have earned a place in the larger conversation, and may even be able to lead their discipline back to a place where such connections are the norm.

Am I foolish to dream that it may someday be common for scholarly voices to be raised, in classroom, colloquy, and publications, to begin to reconnect the particular to the whole, to name, with humility, the pursuit of truth as the real objective of their professions, and to call our students and our society back to a larger understanding of what an education can mean?

I would ask believing faculty, “How do you exercise your stewardship of your discipline?”

Restore shalom within our institutions

Finally, I dream that the biblical cultural mandate would be realized within our institutions of higher learning, that the institutions themselves, often compromised, fractured, and lost among the myriad competing interests and challenges they face, would find restored health, wise leadership, genuine tolerance, a deep civility, restored confidence and courage, righteous priorities, and a deep sense of humor.  Colleges and universities face so many difficult challenges – divestment by church and state, micro-management by political interests, fallout from culture wars, broken business models, scandals in an age of viral news, overbearing donors, threats of disruption by new technologies, and so on.  I do not worry for their survival. After all, they have endured since the 12th century, sometimes through revolution and upheaval.  But they could contribute so much more to human flourishing if they themselves were restored to genuine health, in fact, redeemed to their best purposes, values, and conditions.  Is it unwise to hope for so much, to dream that there may be redemptive power that can reach this far beyond individuals and restore shalom in our great servant institutions?

To believing academics I would cast the question: “How do you practice your stewardship of your institution?”

These are four far-reaching dreams.  They may seem unattainable, but I have seen, as perhaps you have, examples of redemption and wholeness in higher education that prove it may still be worth hoping and praying for.

Joseph could not have known in any detailed way how his faithfulness was critical to God’s redemptive plan.  He just obeyed, each time, the call God placed on him to take some action that seemed unreasonable. And the great redemptive story turned on that tiny axle of faith.  Who knows what dreams God might fulfill with just a few “Josephs” in academia?

Sanford (Sandy) Shugart, PhD, blends two careers, one as president of Valencia College (with 60,000 students and winner of the prestigious Aspen Prize as the nation’s best community college in 2011), another as a poet and singer/songwriter. He says they nourish each other, his “day job” giving him the material that is turned into ballads and folk-rock lyrics of life, work, growing, and growing old. He is the author of Leadership in the Crucible of Work: Discovering the Interior Life of an Authentic Leader.