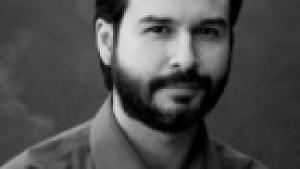 Author, philosopher, and ESN member Robert Velarde’s Conversations with C. S. Lewis: Imaginative Discussions About Life, Christianity and God was published by InterVarsity Press in May 2008. The book is “an imaginative narrative of a fictional encounter with C. S. Lewis,” based on Velarde’s own extensive research into Lewis’ life and writings. The Q&A below originally appeared on InterVarsity Press’s website.

A former atheist, Robert Velarde is the author of The Heart of Narnia (NavPress, 2008) and Inside The Screwtape Letters (Baker). A member of several philosophical and theological societies, he studied philosophy of religion at Denver Seminary and is pursuing graduate studies in philosophy at Southern Evangelical Seminary. He and his family live in Colorado Springs, Colorado. His blog, “A Reasonable Imagination,” can be found here.

Did you know that members of the Emerging Scholars Network receive a 30% discount on InterVarsity Press publications? Click here for details. For additional information about Robert and his book, click here.

C. S. Lewis died in 1963, but I met him last week. At least, I think I did. He appeared in my hospital room, sitting quietly in a worn but plush vinyl chair, working on a crossword puzzle in a tattered newspaper.

So begins Conversations with C. S. Lewis: Imaginative Discussions About Life, Christianity and God. Robert Velarde uses fiction to describe what it might be like to talk with and learn from C. S. Lewis in person, and in his own words. 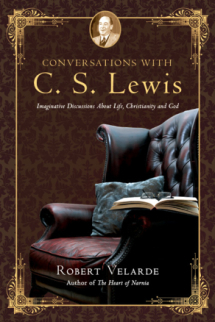 Why did you create a fictional story to introduce readers to C. S. Lewis?

Robert: There are a lot of books out about Lewis, defending the faith, and the viability of Christianity in light of other philosophies, but they are written in a traditional nonfiction format, which doesn’t appeal to everyone. Since most people like stories, myself included, it occurred to me that a story featuring Lewis as one of the main characters would appeal to a broader audience than a more traditional nonfiction book. The fictional format also allows for more entertaining settings and characters. Of course, fiction can also communicate truth, like Christ’s use of parables in the New Testament.

Why did you decide to write Conversations with C. S. Lewis in the first person and from the perspective of the skeptic?

Robert: It makes the book more personal. Since it is written from the point of view of the skeptic character Tom, it also allows for an element of surprise to be expressed from the character telling the story. Since Tom is not expected to know everything about Lewis or his arguments for Christianity, the first-person approach allows Tom to question Lewis, express doubts, share his thoughts with the reader but not necessarily with Lewis and so forth. I think this approach makes the book more appealing to readers (skeptics and Christians) because Tom is a personable fellow, but he’s not a cookie-cutter skeptic and has enough depth to oppose Lewis in many instances.

Describe the experience of trying to re-create what exactly someone like C. S. Lewis would say if you or I were to have a personal conversation with him.

Robert: I’d call this the fun part, but also the difficult part of the project. I didn’t just want to have a character named C. S. Lewis going around saying and doing things that were inconsistent with the ideas or mannerisms of the real Lewis. Understanding his ideas involved extensive research into his own writings, but trying to capture more of his personality involved reading his personal letters as well as reading firsthand accounts of people who knew Lewis. Based on my knowledge of Lewis’s worldview, combined with what I gleaned of him from his letters and the firsthand accounts, I did my best to capture what he might say in personal conversations with a contemporary skeptic.

What surprised you in the writing of this book?

Robert: I think what surprised me the most about writing the book was the realization that Lewis was not just an ivory-tower academic, which is what usually comes to mind when one learns about Lewis’s associations with Oxford and Cambridge. What I gleaned from my research into Lewis’s life was that he was good-natured, caring, joyful and liked to laugh. He also captured the essence of 1 Peter 3:15, which calls Christians to defend the faith “with gentleness and respect” (NIV). Lewis certainly cared about ideas, but more importantly, he cared about people and demonstrated his care in one way by personally responding to the many letters he received on a daily basis.

Describe one of your favorite conversations in the book.

Robert: I particularly enjoyed writing a conversation between Lewis and some of his friends, known as the Inklings, such as J. R. R. Tolkien, Charles Williams and Lewis’s brother, Warren. I also had fun with a scene involving the skeptic character, Tom, riding a motorcycle with Lewis in the sidecar (this is based on the true story of Lewis’s conversion to Christ that took place while he rode in the sidecar of his brother’s motorcycle).

Probably my favorite conversation takes place in a chapter called “Narnia and the World of Imagination.” Instead of being set in a real location, this chapter takes place in Lewis’s imaginary world. While the topic of discussion is primarily about Narnia, reason and imagination, I had a lot of fun with the setting. I’m sure many people will remember a scene in The Lion, the Witch and the Wardrobe where the White Witch comes across a group of feasting Narnian creatures and turns them to stone. Most of the conversation in my chapter takes place at the table where these creatures were feasting and, as the conversation progresses, the creatures come to life and scurry off in various directions. And yes, a lion also makes an appearance in the chapter.

What do you hope readers grasp about C. S. Lewis after reading Conversations with C. S. Lewis?

Robert: Since the book covers a lot of ground in reference to Lewis’s ideas, I’d hope readers would come away with a better understanding of how Lewis defended Christianity in light of competing belief systems, particularly skepticism and atheism. The book will not only provide readers with an introduction to Lewis’s ideas and life, but it is also a sort of primer on defending Christianity, as it addresses the problem of evil, the existence of God, morality, the claims of Christ, grief, immortality, heaven and hell, and more. I’d also like readers to see in Lewis an example of defending Christianity with gentleness and respect.

How did C. S. Lewis influence your life?

Robert: As a former atheist it took me awhile to accept Christ. Along the way I had to be convinced that God exists, that miracles are possible, that Christ really is who he claimed to be and that morality must have an objective source in order to be meaningful. While there were many influences in my journey to Christianity, the writings of C. S. Lewis were key, particularly Mere Christianity.

It was during my sophomore year of college that a winsome Christian woman gave me a copy of Mere Christianity, and I read it eagerly. I didn’t agree with everything Lewis had to say, but the book created a new dilemma for me: How could an obviously intelligent man such as Lewis also have been a Christian?

After my conversion, I continued to read a lot of works by Lewis and was amazed by his variety of writing, but also with the fact that one can discern a consistent Christian worldview in his writings. I’m particularly taken by the genius of the Chronicles of Narnia, The Screwtape Letters and That Hideous Strength.

At the graduate level, I studied the works of C. S. Lewis at Denver Seminary while serving as teaching assistant to Dr. Vernon Grounds, chancellor. During a course on the philosophy of Lewis, I had the pleasure of meeting Douglas Gresham, stepson of Lewis.

My interest in Lewis has obviously extended to my writing, including not only Conversations with C. S. Lewis but also The Heart of Narnia by NavPress and Inside The Screwtape Letters, forthcoming from Baker Books.

Incidentally, the winsome Christian woman who gave me a copy of Mere Christianity became my wife just a few years later!

Would your book appeal to skeptics as well as Christians, then?

Robert: I’d like to think so. Open-minded skeptics, at any rate, will find the conversations of interest. Christians will, I trust, be equipped and edified in their faith. Conversations with C. S. Lewis would be a great book for a Christian and a skeptic to read together, discussing various points of disagreement as they arise. It would also make for an interesting read in a book club or book discussion setting. Given recent antagonism on the part of some atheists toward Christianity, Conversations with C. S. Lewis shows that there is a better way for these groups to dialogue, a way that demonstrates friendship, civility and respect.