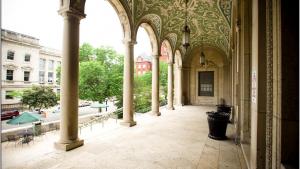 These are the books we believe offer the best places to start as you seek to ask and answer four central questions:

Why should I consider pursuing an academic vocation?

Several philosophers tell their personal stories, revealing how their Christian faith formed and developed, and how it shapes their lives and their calling as thinkers. These writers represent a variety of philosophical dispositions and denominational backgrounds, but all reveal how Christian thinking can inspire scholarship that is highly developed and challenging to reigning, secular theories. -- Annotation by ESN Member.

Friesen, Gary. Decision Making and the Will of God: A Biblical Alternative to the Traditional View. Portland, Ore.: Multnomah Publishers, 1980.

Guinness, Os. The Call: Finding and Fulfilling the Central Purpose of Your Life. Nashville: Word Publishing, 1998.

In this book, Hardy seeks to establish a theology of human labor. Claiming Western understandings of work tend to see it as either the debasement or exaltation of humanity, he offers the Protestant conception of vocation as an alternative to these two extremes. Through work, we not only provide for our own needs, but serve God and humanity in many ways. Human work is an activity through which God reveals His grace. The second half of the book examines vocational choice and modern management theories in light of this biblical conception of work. --- Annotation by ESN Member.

Lewis, C.S. "Learning in War-Time." In The Weight of Glory and Other Addresses. 1949. Reprint, San Francisco: HarperSanFrancisco, 2000.

This 19th Century defense of the Catholic university claims that theology must be at the center of the university, because through theology all other disciplines find coherence and direction.  All disciplines bear on one another and a fruitful study of anything requires being able to see beyond the particular discipline, ultimately to the Creator who created and maintains an understandable, coherent universe.  Written in response to the rise of the modern science-centered, secular university, these essays argue that Church and education are necessary to one another, that the vitality of both is lost if they are separated.  -- Annotation by ESN Member.

In The Scandal of the Evangelical Mind, Mark Noll, Professor of Christian thought at Wheaton University, dissects the current and pervasive trend of anti-intellectualism within the evangelical church and argues convincingly that intellectual development and scholarly pursuit are inextricable aspects of a life that glorifies God. The mind matters because God matters and Truth must be articulated in a world growing evermore hostile to the Gospel and all non-Naturalist philosophy. The intentional divorce of faith from reason, propagated in large part by the Fundamentalist movement, has left Christianity culturally, politically, and academically impotent. But according to Noll, there is hope. Scandal closes with Noll’s suggestions for the necessary innovations and paradigm shifts to move the evangelical church towards a more properly ordered knowledge base within the Church and theology base within the University. This book is a must for Christians in scholarship and those with a burden for elevating the place of the mind and critical thought within their churches. -- Annotation by ESN Member Jacki Christopher.

What do I need to learn about Christian thought and practice to be faithful within my academic calling?

In this book, Augustine seeks to establish the basic principles of Christian learning. He begins by defending the necessity of study against the belief that all spiritual knowledge is imparted directly to the mind from God, and then teaches Christians how to read. He clarifies how to distinguish signs from things, the nature of different kinds of signs, the value of pagan writing, and the right use of rhetorical skills for the Christian teacher. -- Annotation by ESN Member.

This broad, introductory text covers the major branches of philosophy, presenting some of the fundamental questions in each and arguing for what the authors believe are the most appropriate positions for a Christian to take on these questions. The authors are not neutral, but are thorough and fair in their presentation of arguments they find faulty, offering a well-rounded perspective for a beginning student. -- Annotation by ESN Member.

Marsden tells the history of America’s major research universities from their founding in the late 19th Century to the demise, in the early 20th Century, of any meaningful ties to religion. He shows how an ideal of scholarship based on empiricism and an ethics-based, non-sectarian Protestantism easily gave way to the modern, fully secularized university in which religiously informed knowledge is not taken seriously. -- Annotation by ESN Member.

Moreland, J. P. Love Your God with All Your Mind: The Role of Reason in the Life of the Soul.Colorado Springs: NavPress, 1997.

Niebuhr analyzes the perennial question of the proper Christian posture toward human culture, identifying five major positions that Christians have taken on the matter—Christ against culture, the Christ of culture, Christ above culture, Christ and culture in paradox, and Christ the transformer of culture. He observes that the types overlap and concludes that there is no single, correct Christian perspective on culture, the decision being relative in significant respects to the given circumstances of particular Christians.-- Annotation by ESN Member.

“The greatest need you and I have—the greatest need of collective humanity—is renovation of our heart.” Dallas Willard, in his book Renovation of the Heart, shows that it is the heart that defines who we are and thus the area most in need of attention in the quest for spiritual transformation. Willard surveys the six human dimensions of thought, feeling, will, body, social context, and soul and show the impact that each has on the individual as a whole, how each is destroyed by sin and the means by which each may be brought into submission to Christ. For it is only through the power of Christ, working in each human dimension that true positive life change results and the self is made whole. Willard’s book engages the reader at his or her level of personal need and the thought-provoking questions at the end of each chapter make Renovation of the Heart perfect for individual or group study. -- Annotation by ESN Member.

How do I navigate the various stages and transitions of an academic career?

Peters, Robert. Getting What You Came For: The Smart Student’s Guide to Earning a Master’s or Ph.D., rev. ed. New York: Farrar, Straus and Giroux, 1997. (Available from ESN: Review.)

Who can help me at each stage of my professional development, and whom can I help?