The Community of Scholars, Part One 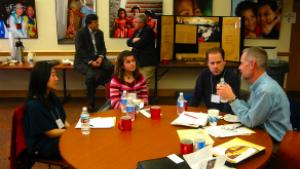 The following was originally presented in December 2008 at Flourishing in the Academy, the national gathering of the Emerging Scholars Network, at Following Christ 2008. Part one was delivered by Marc Baer, Professor and Department Chair of History at Hope College, and part two by Ken Elzinga, Robert C. Taylor Professor of Economics at the University of Virginia.

I. Why mentoring is important

Let’s start with the biblical basis for why faculty mentoring is important:

Those of us poised to be mentors -- that’s all of us -- should use Following Christ 2008’s theme to consider: does the academy’s model of success promote wholeness or emptiness?

There is a role for faculty not only in calling their students to the academy, but each other to new projects or renewal of scholarship or to excellence. Dorothy Sayers’s epigram states boldly: “The only Christian work is good work, well done” (Sayers 1999, 108). That might be our benchmark.

Mentoring is a calling or a gift related to hospitality, wherein the mentor shares her resources. The danger is inducing a sense of obligation to reciprocate, or worse, the impression that cloning me would be a good thing for the academy. So my goal should not be trying to make mentees like me, but rather letting them be like them.

Based on my experience, mentoring is rejuvenating in the same way year-end giving is: you thought for 11.5 months that having all that cash in your bank account somehow provided security and thus happiness. It didn’t; you were much happier giving it away -- especially to IV staffers. And so I encourage all of you to be proactive in seeking mentors because you know it’s good for them. (Cf. Bradley 2007)

All is not lost if one doesn’t find a mentor, but it does really help. Here’s the philosopher Stephen Evans; listen for the connection between mentoring and calling:

I can remember very clearly the conversations I had when I was an undergraduate with Arthur Holmes, the professor at Wheaton College who was my mentor. Holmes told me clearly that I was called to be faithful, and that I must not worry about results, but leave them in God’s hands. At the same time, he said that I had an obligation to think strategically about God’s kingdom in the world today. Was it possible that God had some important work for me to do? Was there a place that I could invest my life strategically, a way to use the gifts and opportunities God had given me for his purposes? Though Holmes himself had a great vision (that God would use him to train a hundred Christians to work as Christian philosophers), the key question he posed was not “Will you become a philosopher?” but “How can you invest your life strategically for the kingdom of God?” (Evans 2004, 32)

The why, then, is summarized by this line from Bonhoeffer’s Life Together:

“The Christian needs another Christian who speaks God’s Word to him.”

II. How to do mentoring of undergraduates

Since 1997 I’ve served as the director of the Hope College Pew Society. This is a formal program, but elements can be appropriated. The purpose of the Pew Society is to challenge some of Hope’s most academically successful students with a vision of college and especially university teaching careers as avenues to Christian service. We seek to generate in their minds that distinction between “academic Christian” versus “Christian academic” that last night Ron Potter challenged us to ponder: the first is a believer, who is a professor, the second a professor whose practice (teaching, scholarship, mentoring) is spiritually soaked.

Each spring I recruit 15-20 second semester sophomores interested in integrating Christian faith, the life of the mind, and a possible calling to teach at the college level. The goal is to have them think through, with a mentor, how our spiritual lives might connect to academic vocations.

I link each student with a faculty mentor in what will be a two-year relationship. This has helped a large number of students make career decisions -- including one next door in the meeting for women in the academy who is working on a Ph. D. in English at Indiana University.

Students and mentors read essays or books or do a Bible study together, or discuss what graduate school and the academic life are like. There is space in whatever is read for discussion about how faith informs academics’ lives.

Other activities in the program include the following:

If you’re a grad student at a research university or a faculty member at a college, you could just do aspects of this, perhaps through an InterVarsity chapter. But having a little program is something that some institutions like, so be creative in discussing with your president why he or she should give you some money to establish a formal program. Please contact the Emerging Scholars Network to learn more.

Imagine academic mentoring as a ladder: we’re all being given a hand from those ahead to help us make it to the next rung, as we’re offering another hand to those who are behind us. Such thinking is counter-cultural: academics tend to be wired for isolation; but consider a different model I learned from our colleague in Christ, Kathy Bassard (professor of English, Virginia Commonwealth University) -- that we make sense to ourselves when we’re surrounded by several generations.

Part two of “The Community of Scholars” was presented by Ken Elzinga, professor of economics at the University of Virginia. Click here to continue reading.

Bradley, Walter. 2007. On being a Christian professor in the secular academy. In The two tasks of the Christian scholar, by William Lane Craig and Paul Gould, 109-126. Wheaton, IL: Crossway.

Marc Baer has been at Hope College since 1983, where he specializes in modern British history. He is the author of Theatre and Disorder in Late Georgian London, published in 1992 by Oxford University Press. Besides courses in British, Irish and imperial history he also teaches a senior seminar, Exploring Faith and Calling. In addition to his teaching and research Baer helped organize the Hope College Veritas Forum, serves as faculty advisor for the InterVarsity chapter at Hope, and for a dozen years has directed the college’s Pew Society, which through a mentoring program helps equip Hope students to consider and prepare for graduate school and university teaching careers.