Symposium Recap: Can a Biologist Trust an Evangelical Christian?

In 2009, Indiana University began a series of themed semesters, or Themesters, which will take place each fall and are designed to engage the university comprehensively. The Themesters are interdisciplinary; the full breadth of departments was encouraged to co-sponsor speakers, and a range of undergraduate classes were offered on the topic. This inaugural Themester was entitled “Evolution, Diversity and Change.”

Our young GFM fellowship decided to plan an academic outreach event, designed to engage the university qua university and to reach out to unbelieving academics. The busy Themester schedule invited us to jump in alongside economists, microbiologists and Richard Dawkins (who was sponsored by the Secular Alliance and the College of Arts and Sciences). Other Christian groups were also planning large scale debates — Can you be good without God? and Is Intelligent Design Viable? — but my co-planner and I wanted an event that would have a good chance of attracting truly secular academics and that would offer a genuine forum for discussion. We decided that faculty and graduate students in the hard sciences would be our audience, and that we needed to steer the discussion away from questions of intelligent design, which often drive the wedge more deeply between the scientific and Christian communities. Instead we chose to address the underlying issue of whether scientists can take belief seriously. We entitled our event, “Can a Biologist Trust an Evangelical Christian?”

We wanted attendees to engage with panelists, whoever they might be, since the first step in changing opinion is to have a real intellectual exchange. We avoided a debate format, because it implicitly creates an either/or scenario. We envisioned our attendees walking away knowing that there are a range of perspectives when it comes to the integration of science and faith, and that a rejection of young earth creationism does not require the rejection of historical (evangelical) Christianity. 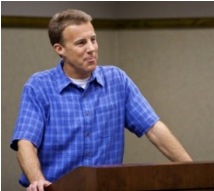 Finding panelists was difficult, because we were on an extremely tight budget. At the time, we knew of no Christian faculty members in the hard sciences at IU. Eventually, we concluded that our panelists would themselves represent a range of perspectives: a hard scientist; a panelist who could speak to the history and thinking behind the Christian response to evolution; and a panelist who could speak pastorally about the evangelical response to evolution. Through the InterVarsity network we found Dr. Jeff Hardin, Chair of the Zoology Department at the University of Wisconsin, Madison, and a respected researcher in his field. Though his schedule was full, he and his wife prayed about his participation, and he agreed to come. Within 24 hours of his agreement we had lined up our two other presenters. Our panel would also include Dr. Tim O’Connor, Chair of the Philosophy Department at IU, to speak about the history of this tension, and Dr. Rich Holdeman, a lecturer in the IU Biology Department, who is also a pastor at Reformed Presbyterian Church in Bloomington.

Following Richard Dawkins talk earlier in the semester, several of our GFM graduate students submitted an editorial to the campus newspaper, the Indiana Daily Student, protesting the false binary that both Dawkins and his most extreme respondents erected between Christian belief and scientific inquiry. Our panel discussion expressed the same message. The panelists all emphasized ways in which faith has been and continues to be entirely compatible with a drive to explore and understand the world around us. 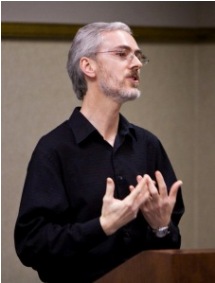 The first question during the Q&A was from a skeptical graduate student who still seemed unable to believe that evangelical Christians could wholeheartedly embrace scientific inquiry — So what about Darwin? The panelists affirmed that Darwinian evolution is so far the best mechanism for explaining change and development in the natural world. But they also all repeatedly emphasized that science should not masquerade as philosophy, nor should atheism masquerade as science — and that science, for all that it can do and discover, cannot answer existential and ethical questions. Through their winsome presentations and keen responses, these three faculty provided models of deeply thoughtful academics who are also deeply committed to religious belief.

The event was very well attended — we had planned for 75, and approximately 100 people packed into our meeting room, keeping us busy running next door for additional chairs! We hope to continue to host panel discussions that address upcoming Themesters, thus engaging with the university as a community of Christian academics. We hope you will enjoy listening to the audio recording of our event. We are incredibly excited about what God is doing at Indiana University.