The Decline of the Secular University: Discussion Guide 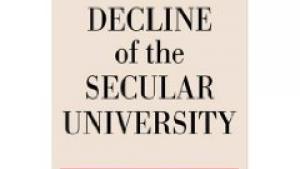 Brief, hard-hitting and often brilliant, this treatise by C. John Sommerville (Professor Emeritus at the University of Florida and member of the Faculty Ministry Advisory Council) builds the controversial argument that secular universities in America have neglected religion at their peril. (Publishers Weekly) C. John Sommerville's study of the secular university is an excellent choice for reading with fellow Christian faculty.

Use the questions below, prepared by the author, to guide your discussion. As Dr. Sommerville advises, "Pick some questions that interest and challenge you, rather than rushing to answer them all."

1. Why are we apt to think that universities are important to American society? How are they important to our economy?

2. Do academics think of universities as important, or complain that they are not?

3. How do you think universities should be important? Are there other, perhaps better, ways that advanced training could be organized?

4. How would you differentiate between knowledge, training, understanding and wisdom? And what is education?

5. Can religion be involved in any of these concepts?

6. What is philosophical naturalism? Do you see it implied in other ideologies or worldviews?

7. What does it mean to call our universities “secular?”

8. Do you see opportunities to open your discipline to a wider discussion, perhaps involving religion?

9. Must religion take the form of doctrines, or are there general perspectives that are irreducibly religious?

10. What does religion have to offer to higher education?

11. Would religious views have to dominate the discussion for it to be important?

12. How important does simple fashion seem in your discipline, as opposed to argument? (Only answer if you have been in your job for twenty years or more.)

1. In what disciplines would one’s understanding of human nature or human needs be important?

2. Do we all imply some view of human nature, despite the relativizing of the concept?

3. Does the actual practice of science involve values that transcend physical facts? What values?

4. How could science be seen as part of a larger religious perspective on human life and history?

6. Are human concerns exhausted by the category of survival value, as evolutionary psychology assumes?

7. What are some problems in giving a physicalist reduction of all values?

8. How does the irreducibility of concepts justify having separate sciences, rather than by resolving them all into physics?

9. If science is part of culture rather than of nature, how does that show how culture “transcends” nature?

10. In what ways does the “human” seem to be a religious concept? How do religions offer a context for all human values?

11. How do universities treat the concept of the human, in your experience? How conscious are they of the complexity of the issue?

12. If the Humanities were renamed Cultural Studies, what would change?

1. Has the fact/value dichotomy been prominent in your discipline?

2. How is the concept of fact actually a value in itself?

3. Why was the distinction between facts and values popular at one time?

4. How are values implicit in professional education programs?

5. How do such courses bridge or leap the supposed gap between the two?

6. Can the Humanities help in considering values? Examples?

7. Can the Humanities help in justifying values? Examples?

8. What different values are implicit in science?

9. When values are discussed, how can religious values be excluded?

10. What are some religious values?

11. What are some differences between Christian and Buddhist values? Muslim? Jewish? An aristocratic code of honor?

12. Where should professors stop in their discussion of values?

1. How would you describe a religious perspective on reality?

2. Take some particular issue in your own field and describe a religious approach to it?

3. Give a secular understanding of the same issue.

6. Must all values be related to ultimate values? Use examples.

7. What is the whole point of science, and can it be considered a religious effort?

8. Must science be philosophically naturalistic, or can it just use naturalism as a method?

9. Why would a philosophically naturalistic person ever write a book?

10. How does personality offer a challenge to naturalism?

11. Why are there different, conflicting religious views on the same subject?

12. Name some ways that the whole life of the university depends on what seem like religious values?

1. Do you feel awkward making judgments on religions? Why?

2. Do you feel nervous criticizing you own religious heritage?

3. Do you tend to see other religions as variants of your own, giving different answers to the same questions?

4. Do you see any point in being curious about other religions?

5. Do you use your knowledge of religions mainly as a basis for criticizing them?

6. How do religions offer our most basic intellectual commitments?

7. Does “philosophy,” say rationalism, strike you as a satisfactory substitute for religion? Is it something one acts on or only considers?

8. Why might you prefer rationalism to religion? And vice versa?

9. How could science or some philosophy be said to be based on faith?

10. What is your definition of faith?

12. Why do secular religious studies departments avoid making clear judgments on religions? What form might their judgments take?

1. Can science study religion? What part(s) of religion could that involve?

3. Are the limits on scientific explanations only practical ones?

4. What are the implications of the statement that “we are part of nature?” What does it say about nature?

5. Is it a weakness of the religious sense that it gathers around the frontiers of science, in the cosmic and the microscopic?

6. How does the existence of science prove that our thinking is not simply the product of blind natural processes?

7. Have scientists entirely done away with any concept of creation?

8. What are meant by “emergent” principles or characteristics?

9. If humans lived forever, their lives would be pointless; only death allows some meaning to an individual life. Might the same be true of the universe?

10. What might the popularity of science fantasy among the young show about them?

11. If science took human characteristics or concepts as basic data, how might science proceed from there?

12. What is meant by "problematizing" science?

1. Why have we now reached the point when secularism can be studied, rather than simply assumed?

2. How can secularism seem like a stage within history, rather than its ultimate destiny?

3. What are the basic assumptions of science? Of rationalism? Of naturalism?

4. What do you see as the good points of secularization?

5. Can we use the benefits of science without giving it our ultimate commitment?

6. Should science make all our choices for us, or only inform some of them?

8. Are universities more about truth or about tolerance?

9. What are the practical limits on tolerance? Are they unavoidable?

10. Is secular equal to neutral? Is secularism neutral?

11. At present, does the Supreme Court think neutrality means secular? Or is their neutrality between religion and non-religion?

12. How can voters justify the government’s partiality toward an effective secular monopoly over education?

1. What is the difference between seeing the study of history as part of the humanities and as a social science?

2. How can the study of history counteract efforts to eliminate the categories of personality and the human?

3. If everything is illuminated by a study of its history, what would you like to study the history of?

4. Why do you suppose there is a general suspicion of the study of “Western Civilization” in American universities?

5. Do you suppose the Third World is uninterested in Western Civilization?

6. How can a study of history be used as a critique of the present?

7. How can it be used as a critique of the past?

8. How does history teach us about ourselves?

9. How can we justify the study of anything that doesn’t aid the economy?

10. What do you think the phrase “narrative busting” means? At what point in life would it be justified?

11. How would you check on historical claims that sound surprising?

12. Why are the origins of Christianity the most interesting subject in pre-modern history?

1. Why are professors tempted to state or hint at moral judgments in many disciplines?

2. Do students welcome this?

3. Why do we say that secular education is limited to “values clarification”?

4. Should religious values be clarified as well as others, in a secular education?

6. Should it be concentrated in courses on “Ethics in (whatever)”?

7. Would there be drawbacks to integrating ethical exploration throughout the curriculum?

8. What are ultimate values? What are instrumental values?

9. Would Christian colleges or universities have fewer problems in the discussion of values? If so, what would their dangers be?

10. Why are narrative approaches to history and the social sciences favorable toward moral considerations?

11. How are teachers narrators in their own right?

12. Are freedom, “empowerment,” or money, instrumental or ultimate values?

1. What might be a realistic goal for a religious impact on the American university?

2. What would be an undesirable goal for that?

3. What makes concepts of the human a good place to introduce religion into the university’s thinking?

4. Is the university presently concerned with human welfare? How helpful is it in this area?

5. Is a focus on the economy as far as it needs to go here?

6. What does the term “Personalism” suggest? What would be its opposite?

7. What if religious persons, even Christians, disagree on questions of the human good or human welfare? Does that discredit their positions? Do secularists agree on such questions?

8. What is meant by starting from first principles in arguments involving religion?

9. What is good about starting discussions with questions? What is risky about that?

10. Is it possible to argue from the Bible, without some prior grounding of its authority in the area under discussion? What is the authority behind the Bible, for purposes of academic debate?

11. If moral intuitions cannot be scientifically “reduced” or shown to be culturally relative, can we challenge others to consider them?

12. In what parts of the university do you think religious perspectives would have a chance of establishing their legitimacy?

1. Does our society now have a common vision, like Modernity and Modernism provided fifty years ago?

2. Could secularist naturalism serve as that vision?

3. Can Christianity operate better when there is no common vision (assuming that it has never provided the whole of a society’s vision)?

4. How does our mass media frame our thinking? Can the Internet provide the bonding that the term media (i.e. medium, of communication and exchange) implies?

5. What is the effect of daily scheduling of our mass media?

6. Has the educational establishment identified its ultimate goals?

7. What place does tolerance, diversity, multiculturalism, etc. have in those considerations?

8. Have you seen fashions come and go within your discipline? (Only answer if you’ve been in your job for 20 years or more.)

9. How would you compare the importance of universities as against the news industry in American society or culture?

10. Compare the importance of our entertainment industry as against our educational institutions and news industry.

11. Can entertainment have an educational impact? Is it having any good influence at present?

12. Have you noticed any greater receptiveness to religious contributions to our social life, in the present state of our cultural forces?