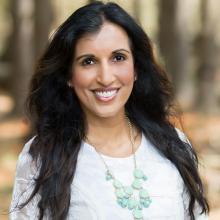 Sheeba has built a career building purpose-driven brands in the CPG, retail, and nonprofit sectors. She spent ten years in executive roles at Mondelēz International and Kraft Foods.    She was the Global Marketing Director for the World’s #1 Cookie, Oreo, a $2 billion+ brand present in over 100 countries.   Sheeba also served as the VP of Global Marketing Strategy & Communications for International Justice Mission, the largest anti-slavery organization in the world.   She oversaw the redesign of IJM’s global brand and launch of the book, The Locust Effect, written by Gary Haugen, Founder & CEO. The book was named a Washington Post Best Seller and featured at the World Economic Forum and TED.  Sheeba was recently a member of the  turnaround team to help revitalize one of America's most well-known retailers, JCPenney.  As the  Vice President of Marketing Strategy & Communications,  she led the modernization of JCPenney’s brand, making it more relevant to a younger customer base. She is currently advising private equity teams and start-up CEOs in developing growth strategies for ventures in the public and private sectors.

Sheeba has a heart for prayer and is passionate about global ministry. She is a member of the CEO advisory team for Redeemer City to City, an organization founded by Timothy Keller, which equips leaders to plant churches around the world.  She also serves an advisor for entrepreneurs at Praxis, a startup accelerator focused on Kingdom-based entrepreneurship. She holds a BS in Chemical Engineering from the University of Virginia and an MBA from the Harvard Business School.