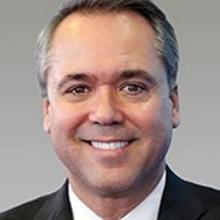 Scott G. Stephenson is chairman, president and chief executive officer of Verisk Analytics, bringing more than 30 years of executive experience and a successful record of strategic leadership and innovation to the company. Scott’s focus on long-term value creation has enabled the company’s peer-leading financial growth. Since its initial public offering in 2009— the largest IPO that year—Verisk has increased its revenue at a compound annual growth rate of 10 percent.

Previously, Scott was appointed chairman of the board in 2016, CEO in 2013, and president in 2011. Starting in 2008, he served as chief operating officer for five years. Before joining Verisk, Scott was a senior partner with Boston Consulting Group. He also served as an advisor to Silver Lake Partners, a technology-oriented private equity firm.

In 2019, Forbes recognized Scott as one of America’s Most Innovative Leaders and, in 2018, as one of the top 25 Most Innovative Leaders worldwide. Forbes also named Verisk one of its World’s Best Employers (2018), an America’s Best Employers for Women (2018), and one of the World’s Most Innovative Companies (2015–2017). In 2015, Verisk was added to the S&P 500 Index, and Institutional Investor chose Scott as the number one CEO among sell-side analysts in the company’s industry category.

Under Scott’s leadership, the company introduced The Verisk Way—powerful principles to serve, add value, and innovate that guide how the company works with customers, employees, shareholders, and communities alike. Scott’s vision and quest for excellence are recognized as key reasons the company continues to achieve strong profitability and shareholder returns, remains firmly committed to the customer experience, views corporate sustainability and responsibility as top priorities, and is dedicated to Verisk’s recognition as an employer of choice.

Scott holds a B.S. in mechanical engineering from the University of Virginia and an M.B.A. from Harvard Business School.

Supporting his commitment to community and social responsibility, Scott serves on several civic and charitable boards. He’s a member of the Board of Advisors at the Data Science Institute at the University of Virginia, where he and his wife established the Stephenson Chair in Data Science. He’s also vice chair of the Board of Directors for The Bowery Mission in New York City.