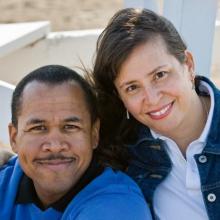 Michael Allen is a Co-Founder of Together Chicago and serves as the Chief Strategy Officer. He was born in Kingston, Jamaica and immigrated to Fort Lauderdale, Florida with his family in 1977.  In 1986 he became a naturalized U.S. citizen. Early in his professional career, Michael was called into ministry under the leadership of Dr. O.S. Hawkins, First Baptist Church – Ft. Lauderdale (1989). In 1997, Michael served as Assistant Pastor of Urban Outreach and Evangelism at The Moody Church in Chicago, IL . Michael also served as the Associate Pastor at Sagemont Church in Houston, TX (2002).

Michael currently serves as the Senior Pastor at Uptown Baptist Church. He also serves as Vice Chairman of the board of the Pacific Garden Mission.

Michael holds a Masters in Divinity from Trinity International University, a Bachelors of Arts in Biblical Studies from Trinity College – Miami, FL and an Associates in Computer Electronics.

Michael is married to Marilza from Rio de Janeiro, Brazil and they have 4 children.