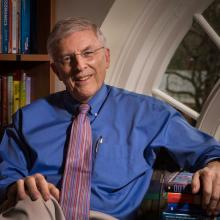 An expert in antitrust economics, and he has testified in several precedent-setting antitrust cases, including three Supreme Court decisions. As the author of more than seventy academic publications, Mr. Elzinga also is known for his mystery novels, co-authored with William Breit (under the penname Marshall Jevons), in which the protagonist employs economic analysis to solve crimes. Mr. Elzinga has a B.A. and honorary doctorate from Kalamazoo College and a Ph.D. from Michigan State University. He has been a member of the faculty at the University of Virginia since 1967.