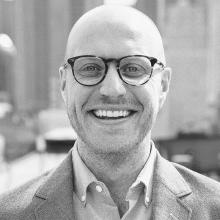 Jon Hart, Partner at Praxis, loves working with builders and entrepreneurs to connect their heart & purpose. In his role at Praxis, he works on strategic partnerships, ecosystems, and programs to bring vocational training on redemptive action to more people. Previously, he spent seven years at a Fortune 100 Company, where he helped launch a new venture and revive another as part of a turnaround strategy. Jon was also an Executive Producer of a successful independent film.

In addition to his work at Praxis, Jon is a founding board member of 100cameras, a nonprofit that empowers youth to create change in their communities through photography. He has also served as an advisor and mentor for the Quarter Zero and Catapult Incubators, and taught entrepreneurship as an adjunct at The King’s College NYC.

John holds a BS from the Carlson School of Management at the University of Minnesota and lives in New York City.