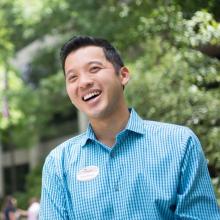 Jesse Ferlianto is a Principal Team Leader in the Customer Digital Experience division at Chick-fil-A (an $11 billion restaurant business), which stewards all of the brand’s tech-powered customer experiences such as the Chick-fil-A App, Chick-fil-A One membership program, Chick-fil-A.com, digital discovery, digital ordering & fulfillment and on-demand delivery.  Prior to this role, Jesse served as a Sales & Brand Growth Consultant, advising Chick-fil-A franchisees in the development and implementation of business plans and marketing strategies at the local, DMA, and regional levels.

Jesse graduated #1 in his class with degrees in Business & Economics from Emory University, and earned his MBA from the UCLA Anderson School of Management.  Prior to business school, Jesse worked in distressed investment banking for Alvarez & Marsal and Morgan Joseph, with a focus on middle-market M&A, creditor advisory and financial restructuring.

Outside of the office and when not delighting in the company of his wife and daughter, Jesse enjoys playing the piano and continues to be an avid tennis player after earning All-American honors as a part of a 2-time NCAA championship-winning squad during his undergrad years.  He is a member of Church of the Apostles in Atlanta, and enjoys getting equipped on various apologetics topics as well as being put in his place by the expository preaching of the likes of Paul Washer and John MacArthur. Jesse is married to his wife Susan and is privileged to be called “dad” by his 15-month old daughter, Naomi.