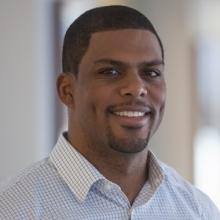 Jason Wright is Partner in McKinsey & Company’s Washington DC office, where he helps companies enact operations strategy in both the private and public sector. Jason is part of the McKinsey Service Operations practice and a core leader in the North American Defense and Security practice. He also leads diversity and inclusion efforts in the DC office and spearheads North American outreach to executives of color.

Jason recently joined the Board of Trustees at Union Theological Seminary. He is also a former teaching pastor who leads addiction recovery groups. Prior to joining McKinsey, he was a running back in the National Football League, finishing his athletic career as a team captain and labor union leader during the 2011 NFL Lockout. He has a B.A. in Psychology from Northwestern University and a M.B.A. in Operations and Finance from the University of Chicago Booth School of Business. He lives in Northern Virginia with his wife, Tiffany, and two young children.