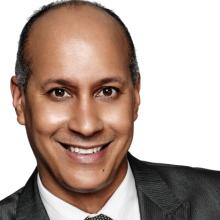 Prior to his current position, Ferguson was the Chief Operating Officer at Revolt and Chief Growth Officer of Combs Enterprises.

He joined Combs Enterprises in 1998 and was a trusted advisor to Mr. Sean Combs for 19 years, serving as CFO and managing all business operations for Mr. Combs and his brands. Derek has helped to develop some of Mr. Combs most important deals, including: negotiating a distribution contract from Comcast for Revolt TV; the acquisition of Enyce Clothing from Liz Claiborne; the successful launch of Sean John Clothing; launching Blue Flame Marketing; negotiating several joint venture deals involving Bad Boy Records.

Prior to joining Combs Enterprises, Derek was the Vice President of Finance and Operations for BMG Special Products, a division of BMG Entertainment. He began his tenure at BMG Entertainment in January 1996 as Vice President of Worldwide Finance. He had previously served as the Chief Operating Officer of Urban Profile Communications Inc., a start-up magazine that he co-founded. The magazine was sold in 1991 at which time Derek joined Bain and Company. Ferguson’s professional career began in 1985 when he worked for three years at Coopers and Lybrand (C&L) as an auditor and mergers and acquisitions analyst. He earned his CPA during his tenure at C&L.

Derek is a core member of New York Covenant Church in New Rochelle, NY where he is the leader of the Economic Justice ministry. Through this ministry the Church has launched various businesses including: Cross Trainers Apparel, Covenant Building Services and Life Music. His ministry efforts have crossed over into his workplace where he has held bible studies for employees at Combs Enterprises over the years. The bible studies led New York Covenant Church to launch Tuesday Night Church in Manhattan.

Derek is a 1990 graduate of Harvard Business School, and a 1985 graduate of the Wharton School at the University of Pennsylvania.