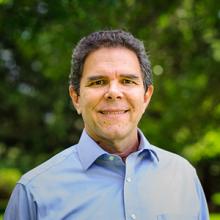 Bobby Gross currently serves as the Vice President for Graduate & Faculty Ministries for InterVarsity Christian Fellowship. In his career with InterVarsity, Bobby has served as an InterVarsity chaplain at the University of Florida; launched campus ministry in South Florida; given leadership as the Regional Director for New York/New Jersey; and served as a National Field Director overseeing four undergraduate regions comprising 17 states.

Bobby is the author of Living in the Christian Year: Time to Inhabit the Story of God (InterVarsity Press, 2009). He has contributed chapters to three other books, including Faith on the Edge (InterVarsity Press) and Signs of Hope in the City (Judson). He has served on the board of Christians in the Visual Arts (CIVA). Bobby enjoys reading widely, writing poetry, and collecting contemporary art on religious themes. He lives in Atlanta with his wife Charlene.