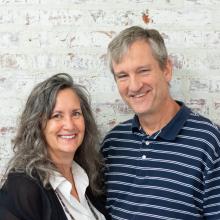 Alan Barnhart came to Christ in high school at a Young Life camp in Colorado.

He has an amazing wife, Katherine, and six adult children, three daughters-in-law, one son-in-law and six grandkids.

Alan has a boring resume—he has worked for the same company since he was 10 years old and has had the same position since 1986.  Barnhart Crane and Rigging Company is a Heavy Lifting and Heavy Transport company based in Memphis, TN with offices in 40 cities across the US.  By God’s grace, the company has grown an average of 19% per year for 33 years.  Barnhart provides services to heavy industry and construction, focusing on power plants (wind, nuclear, and fossil fuel) and the petrochemical industry.

Alan’s fear of affluence caused him to cap his lifestyle.  His passion for missions has taken him to over 60 countries. Barnhart Cranew and Rigging invests 50% of its profits into strategic missions. Barnhart team members and spouses take part in the decision-making process.  Over 50 team members have traveled internationally in that effort. Alan and Katherine Barnhart placed 100% of the equity of the company into a charitable trust.

Alan attends First Evangelical Church and is involved with C12.

Katherine Barnhart is the daughter of the Most High, the wife of Alan, and the mother of Nicholas and Missy, Nathan and Suzanna, Janie and Alex, Kepler and Gabby, Marah, and Noah. Katherine is a servant catalyst who loves God and lives intentionally. She serves several Kingdom initiatives including The GROVE Group, Every Tribe Every Nation, National Christian Foundation and American Bible Society. Her passion for missional impact has taken her all over the world. Katherine knows how to pack light – for trips and for life.